Folding bikes have been around for a while, but they're usually small and fold up when not in use. The 20-inch folding electric bike is a different take on what a folding bike can be - it folds not just the wheels, but the whole frame to make it so much more compact in your home or office. 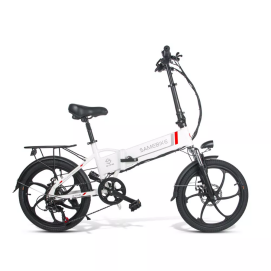 How Does a 20-Inch Folding Electric Bike Work?

A 20-inch folding electric bike is a great idea for those who want the convenience of an electric bike, but don’t want to deal with the hassle of having to fold it up and store it away when they’re not using it.

So, how does a folding electric bike work? Well, the key is in the battery. Most folding electric bikes have a lithium-ion battery that powers the motor. This means that you can pedal as you would on a regular bike, but you also have the option of using the motor to give you a boost when you need it.

The other key component of a folding electric bike is the motor itself. This is what gives you the power to ride up hills and over long distances without getting tired. Many folding electric bikes have motors that are powerful enough to reach speeds of 20 miles per hour or more!

So, if you’re looking for a convenient way to get around town or commute to work, a folding electric bike could be just what you need. Just make sure to do your research before buying one so that you get a model that’s right for you.

Why is a 20-inch size a good idea for an electric bike?

There are a few reasons that a 20-inch size is a good idea for an electric bike. First, it makes the ebike more maneuverable and easier to handle, which is especially helpful if you're riding in traffic or crowded areas. Second, it's easier to store and transport a smaller ebike, so you can take it with you on public transportation or in your car. Finally, a smaller ebike is generally less expensive than a larger one, so it's a good option if you're on a budget.

This 20 Inch Folding Electric Bike is perfect for those who want to get around town without having to deal with traffic or parking. It's also great for those who live in smaller spaces and don't have room for a full-sized bike. Plus, it's just really fun to ride! If you're looking for an electric bike that can fold up small and be easily transported, the 20 Inch Folding Electric Bike from SAMEBIKE is worth considering.